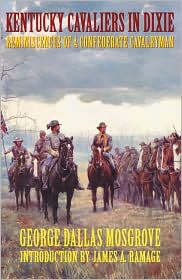 "Kentucky Cavaliers in Dixie, Reminiscences of a Confederate Cavalryman"*

I awoke at the first light of the dawn and saw that, as usual, a dense fog enveloped mountain and valley.

All was quiet and impenetrably dark in front.

Presently I heard a shot, then another and another until the firing swelled to the volume of that of a skirmish line. It seemed to indicate that the enemy were still in our front. Some adventurous scouts, however, soon came in and reported the enemy was non est inventus. But, what did that firing mean? I mounted my horse, and guided by the occasional pistol or rifle shot made my way through the fog until I had arrived at a point some distance to the front and right of the position from which I had started. I soon became aware of the fact that I was in front of Robertson’s and Dibbrell’s brigades, and that the desultory firing was at once explained - the Tennesseans were killing negroes. Dead Federals, whites and negroes, were lying all about me. Of course many of the negroes had been killed in battle, but many of them had been killed after the battle, that morning. Hearing more firing in front, I cautiously rode forward and came upon a squad of Tennesseans, mad and excited to the highest degree.

They were shooting every wounded negro they could find. Hearing firing on other parts of the field, I knew that the same awful work was going on all about me. It was horrible, most horrible. Robertson’s and Dibbrell’s brigades had lost many good men and officers, probably shot by these same negroes, and they were so exasperated that they could not be deterred from their murderous work. Very many of the negroes standing about in groups were only slightly wounded, but they soon went down before the unerring pistols and rifles of the enraged Tennesseans. Had Burbridge done his duty he could have carried those wounded Africans off with his retreating column. Many of them were not disabled to the extent that they could not travel. They had not been awakened when the Federals "folded up their tents and silently stole away." The poor, unfortunate negroes had overslept themselves and found they had been deserted by their comrades and left to be massacred - a fate that Burbridge must have known would befall them should they fall into Confederate hands. I pitied them from the bottom of my heart and would have interposed in their behalf had I not known that any effort to save them would be futile. Some of them were so slightly wounded that they could even run, but when they ran from the muzzle of one pistol it was only to be confronted by another. Entering a little log cabin, I paused at the threshold when I saw seven or eight slightly wounded negroes standing with their backs against the walls. I had scarcely been there a minute when a pistol-shot from the door caused me to turn and observe a boy, not more than sixteen years old, with a pistol in each hand. I stepped back, telling him to hold on until I could get out of the way. In less time than I can write it, the boy had shot every negro in the room. Every time he pulled a trigger a negro fell dead. Generally the negroes met their fate sullenly. It was bang, bang, all over the field - negroes dropping everywhere. About this time General Breckinridge, General Duke and other officers appeared on the scene. General Breckinridge, with blazing eyes and thunderous tones, ordered that the massacre should be stopped. He rode away - the shooting went on. The men could not be restrained. I saw a youth approach a bright-looking mulatto boy standing quietly in front of a log cabin, who seemed to think he was in no danger. The young soldier leveled his pistol, and then the little mulatto jumped behind a sapling not larger than a man’s arm, and cried out that General Duke had ordered him to remain there until he should return. It was of no use. In another moment the little mulatto was a corpse. It was said, I know not how true, that General Duke had recognized the young negro as one who had belonged to the family of Morgan, or Duke, at Lexington, Ky.

The ring of the rifle continued to sound the death-knell of the poor negroes. They were all killed - a multitude of them. The sable soldier was not accorded the privilege of surrendering himself a prisoner of war. I did not see any of the Kentuckians shoot a negro. A few of them, however, may have done so. Not having met the negroes in battle they had not the same provocation as the Tennesseans.

"Kentucky Cavaliers in Dixie, Reminiscences of a Confederate Cavalryman"

The 1957 edition was reprinted in 1999 by Bison Books, copyright of the University of Nebraska Press.

This excerpt from this reprint was graciously transcribed by Uley Washburn.