Debate remains over the number of black prisoners murdered after the Battle of Saltville, but a group is united in its effort to honor their valor 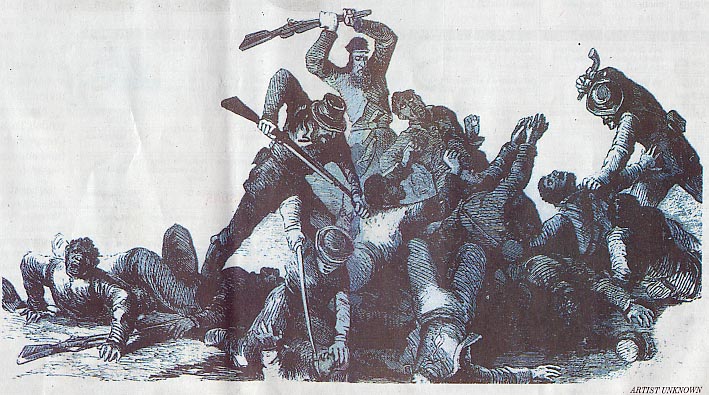 By TONIA MOXLEY, THE ROANOKE TIMES

In one of the few Civil War battles fought in Southwest Virginia, a heavily outnumbered Confederate force repulsed a Union attack at Saltville on Oct. 2, 1864. Despite the drama of the battle, it would have remained a historical footnote had Confederate victors not murdered an unknown number of black prisoners of war in the days that followed.

The killings came to be known as the "Saltville Massacre," though historians disagree on whether there were enough victims to constitute a massacre. Estimates range from a dozen to 150. A mass grave, rumored to be in the area, never has been found.

Regardless of the mysteries surrounding the event, a group of people have come together to tell the story and honor the sacrifice of these often-forgotten soldiers. The Fourth Annual Memorial and Remembrance Service will be held Tuesday at 7 p.m. on Chestnut Ridge in Saltville.

Bill Archer, a reporter from West Virginia, came to Saltville in 1998 to cover a re-enactment of the battle. Locals told him the story of the 5th and 6th U.S. Colored Cavalry units, regiments made up mostly of former slaves. With only three weeks of military training, these men led an attack on one of the the most heavily fortified nonmilitary outposts in the country. At least 118 of the 600-member black force were killed or wounded in the battle. The next morning, the wounded were executed and, according to oral history, dumped into a nearby sinkhole. 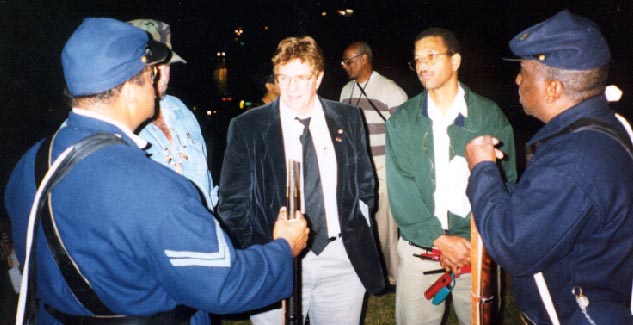 West Virginia reporter Bill Arhcer (center) is shown with participants from the 1999 Memorial and Remembrance Service. "This is America.  These were U.S. soldiers," he says referring to Saltville.  "The United States abandoned them....How could you leave your wounded?"

The story astonished Archer, the son of a military man. Originally from Pennsylvania, Archer was at West Virginia University during the Vietnam War. He understands the importance of accounting for MIAs because many of his contemporaries were lost in the jungles of Southeast Asia.  "This is America. These were U.S. soldiers," he says. "The United States abandoned them; Burbridge abandoned them. ... How could you leave your wounded?"

In 1864, Union Gen. Stephen Gano Burbridge was trying to salvage his sinking military career. He knew that Saltville was the major supplier of salt, a food preservative, to the Southern army. If Burbridge could destroy those saltworks, his career might be revived. But he needed troops.

Congress had established the Bureau of Colored Troops in May 1863 to recruit and train black soldiers for the war effort. Burbridge's state of Kentucky was bitterly divided over the war, and many white Kentuckians were unwilling to enlist. So Burbridge, under the auspices of the BCT, ordered the formation of the 5th and 6th regiments of the USCC at Camp Nelson, Ky. One of his recruits was a Kentucky freedman named Samuel Truehart. Truehart brought his fiancée, Mary Elliot, when he enlisted. An escaped slave, Mary remained under the protection of the U.S. government at Camp Nelson when Truehart marched off to Southwest Virginia.

Despite a lack of training and merciless taunting by their white Union counterparts, the men of the 5th and 6th distinguished themselves at Saltville. One Confederate cavalryman wrote that he "never saw troops fight like they did. The rebels were firing on them with grape and canister and were mowing them down by the scores but others kept straight on." A Confederate officer concurred: "I have seen white troops fight in 27 battles and never saw any fight any better than the men of the 5th and 6th," he wrote.

But Burbridge was a lackluster tactician and his 5,000-man force was routed by the 2,500 Confederates. He slipped back to Kentucky, abandoning his wounded to the enemy.

Historians disagree about what happened the next morning. Some argue that another war began - a guerrilla war against black soldiers. In a 1971 article in Civil War Times Illustrated, historian William Davis argued that 150 black POWs were executed by Confederate soldiers at Saltville.

"They were shooting every wounded negro they could find. Hearing firing on other parts of the field, I knew the same awful work was going on all about me."

" ... the continual sing of the rifle, sung the death knell of many a poor negro who was unfortunate enough not to be killed yesterday ... "

" ... and then a little mulatto jumped behind a sapling, and cried out that General Duke had ordered him to remain there ... it was no use. In another moment the little mulatto was a corpse." 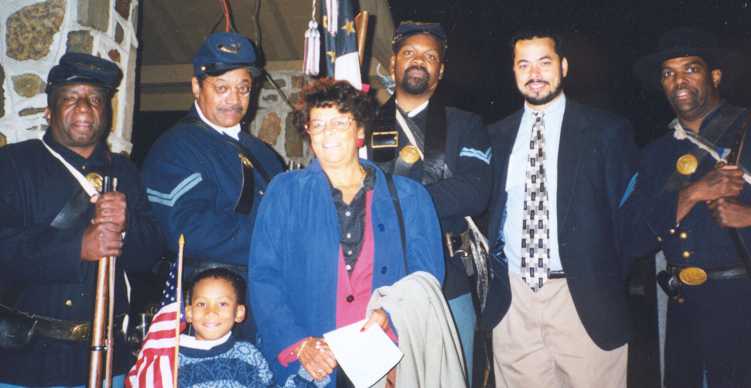 Re-enactors from the 54th Massachusetts (Glory Regiment) with Jason (from left), Phyllis and David Brown at the 1999 service.  For Phyllis Brown, the memorial tells the world that African Americans fought for their freedom.

These and other reports, most from Confederate sources, describe a massacre that lasted for days after the initial battle, extending even to the Emory and Henry field hospital 12 miles away.

William Marvel argued in Blue and Gray Magazine in 1991 that not more than 12 black soldiers could have been murdered at Saltville. He calls it an atrocity but says the numbers don't add up to a massacre. Marvel is known in Civil War circles as a "myth-buster" - a thorough researcher who takes fresh perspectives on traditional conclusions.

Two men, Thomas Mays and David Brown, take issue with Marvel's conclusions. Mays, now a professor of history at Quincy University in Illinois, has studied the Saltville Massacre since he was a graduate student at Virginia Tech. His research suggests that at least 46 men were murdered at Saltville.

Brown, executive director of a nonprofit organization in Washington, D.C., became interested because his great-grandfather was Samuel Truehart, the Kentucky enlistee, who survived both the battle and the massacre.

Brown and his mother, Phyllis, researched the battle and its aftermath at the National Archives. They found records of men that neither Marvel nor Mays had found. Brown posted his research and conclusions, along with a list of MIAs, on the Internet. The reading of these names and the lighting of luminaries in their honor are the central feature of the annual Saltville memorial service.

The memorial is an integrated affair, bringing people from several states and differing backgrounds and politics together to help heal the wounds of a nation torn by the war and the institution of slavery. 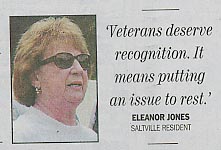 Saltville resident Eleanor Jones says her grandfather, 14 years old at the time, witnessed the battle and the massacre from behind Confederate lines. She is proud of her Confederate heritage and says she doesn't think about slavery when she thinks about the South.

"The South means gentility, good manners and hospitality to me," she says. But she is a big supporter of the memorial service and dismisses concerns that "dredging up the past" might hurt the town's fledgling tourism industry. "Veterans deserve recognition," she says. "It means putting an issue to rest."

Jim Bordwine, who grew up in Saltville and still lives there, says his great-grandfather may have participated in the massacre. Bordwine always has loved history and now spends most of his free time as a re-enactor. He attends the Saltville memorial every year in Confederate uniform.

"Both sides needed to be represented," he says. "We have to show that we can stand together, that we're not still fighting."

Ann Butler has spent much of her professional life preserving and passing on black history. She has worked at Camp Nelson National Historical Park and currently directs the center for the study of Kentucky African-Americans at Kentucky State University. She has consulted on the Saltville memorial since its inception and is scheduled to be a speaker this year.

"It's very difficult for African-Americans to find connections to geographic place," she says. "History has been sanitized and our visible presence has been written out. Memorials help us reclaim a local landscape and the histories surrounding an area."

Phyllis Brown knows just what Butler means. She had never visited the rural South before coming to the Saltville memorial service in 1998. For her, "the memorial tells the world that African-Americans fought for their freedom. They didn't wait for others to win it for them. They took their future in their own hands."

For more information about the fourth annual Memorial and Remembrance Service for the soldiers of the 5th and 6th USCC, call (540) 496-5342. For more information on Samuel Truehart and the Saltville Massacre, log on to http://mywebpages.comcast.net/5thuscc/index.htm